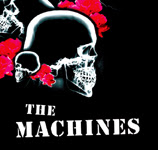 There's a few of them kicking about.
Punk bands from the late seventies that is.
A rule of thumb for most people is that if they didn't make it big then it would maybe be good idea to leave the lone demo tape and press cutting in the memory box and keep the stories of the glory days for sharing over a pint with mates.
However there's always those little diamonds in the rough that shine as the exception to the rule, and that's where The Machines come in.
Formed in 1977 they lasted for about a year and did a hit and run on all the legendary clubs, and managed to get an ep out that Record Collector has in it's top 100 rare discs to grab if you can.
Not a bad innings really, but the story didn't end there, as late in the noughties the reformed and managing to neatly avoid going down the UK82 punk dead end street and released a fresh ten track album that highlighted that there was life in the old dog yet.
Quite a lot of life in fact.
Now both the ep and the album, along with four unreleased demo tracks from the seventies, has surfaced on a one stop for the lot CD simply entitled The Machines, and there's very little on it that the band would need to hang their heads in collective shame about.
You really don't have to consider the songs in the context of their time to wring out any enjoyment from them as they sound as good as anything that the young retro whipper-snappers are releasing just now.
This is punk rock from when it was still taking rock and roll and giving it a bit of a boot up the arse. There's no post punk meanderings, or the nonsensible smash the system roar that was to come, just good honest rockin' with a snarling street level slap to it that the world needed at the time.
That stuff never grows old really.
Buy it here.
Posted by It's a **** thing at 10:20