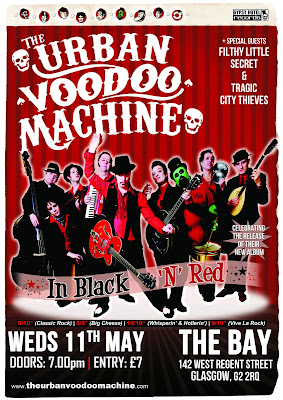 Everyone wants to run away and join the circus at some point in their life.
The allure of the nomadic gypsy lifestyle pulls at the sense of adventure that all children have.
The big top, the greasepaint, the exotic ladies, the screams, the thrills, the spills and the chills all serve to entice us towards the unknown.
Then we get older and leave it behind us, but every once in a while the tug is still there.
Never more so than at an Urban Voodoo Machine show it would seem.
This multi legged group of musical rapscallions are the circus, the freak show, the Weimar cabaret, le cage aux folles and the down and dirty juke joints of the Mississippi all rolled into one.
When they play they're reaching out to whisper into our ear that packing a case to jump aboard the crazy train with a ticket to an unknown future is a perfectly sensible option to consider.
There's magic in the air at one of their shows
Magic and anarchy.
Anything could happen.
There is only one rule and that is that there are no rules.
Don't even try and put your finger on what it is that makes what they do so enticing, because you can't.
There isn't one specific thing that could be singled out and highlighted as the source of entertainment.
Instead it's a communal party, a melting pot of characters and persona's that all provide something different to the mix.
This throw it at the wall and see what sticks attitude provides us with an orgy of sound that is hot, sexy, bold, brash and most importantly makes you want to dance and throw caution to the wind all at the same time.
They should make shows like this one illegal, because if they did, then we could use The Urban Voodoo machine as an excuse to rise up and overthrow the government while enjoying the best fuckin' soundtrack to a revolution that anyone could imagine.
Posted by It's a **** thing at 15:52