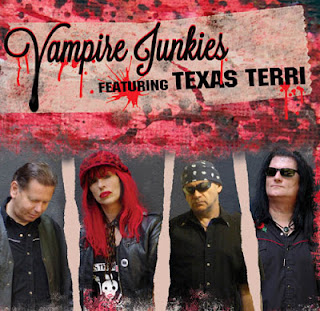 Oooh. Vampire Junkies featuring Texas Terri.
When that dropped on the matt I was very surprised.
I hadn't even heard a whisper about it.
With the cellophane wrapper trailing in my wake I had it on the stereo within seconds.
Guess what?
It's everything I wanted it to be.
The music is exactly what needs to be backing up Texas Terri.
In gang parlance the guitars are screaming we've got your back.
The drums are pounding out a war cry.
There's only five tracks, but that's plenty to get your teeth into.
It's got the blood of the Stooges and the New York Dolls painted over its scraped knuckles.
You would swear that it had crawled from the gutter of the Bowery after washing up there when it was chased out of the Motor City.
That's not that it sounds like a lost master tape from the seventies though.
This is so fresh that if it was meat then it would be so rare it would look like someone had just introduced it to a grill before slapping it down in front of you.
Remember when there was a resurgent of glam rock bands who melded a punk attitude to sleazy rock and roll?
It was something that you can hear on a few bands debuts before the major labels watered it all down and packaged it as hair metal.
Well there's a whole lot of that lipstick smeared fuck you attitude going on here as well, but it's all 2013 baby.
In my head this is the sort of album that should be riding high in the charts.
It certainly shits all over the pre-packaged and passion free dross that I keep hearing being pushed at people.