The Other Side - Can you see it coming. 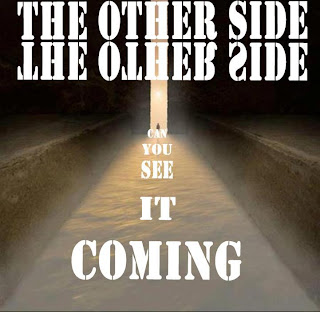 Traditional rock bands have always managed to weather the storm of passing trends.
Mainly because they don't mess with the template.
You can turn up at a gig any week in the last forty years in a club and find a rock band with their heads down ploughing through the same old riffs.
There's nothing wrong with that.
There's a certain admirable bullish attitude being displayed as they give the punters what they want.
It's not a turn off for me, but given the choice I usually gravitate to something that leans towards throwing a spanner into the works, and that's where The Other Side come in.
With their latest album they are musically treading the same path as other bands of their ilk, but the spanner being added to the mix is in the lyrics.
Forget your damsels in distress, your fairies with boots and the space dragon.
That's not where The Other Side are coming from.
With the Tolkien fantasies cast to the side they are sharply going for the jugular and tearing the curtain down that the bankers and successive governments wish to lurk behind.
Social ills are dragged out into the light and battered senseless with the hammer of righteous rock and roll.
Midway through the album you get a distinct impression that the oft illustrated rock god that adorns many a record sleeve would perfectly suit the donning of a V for Vendetta mask.
Not a bad thing in my opinion.
Come the revolution I wouldn't mind seeing a berserker riding into battle on behalf of the people to the accompaniment of The Other Side being blasted out as the call to arms.
I suppose what I'm trying to say is that the band are well worth checking out.
Especially if you are sick of the same old same old in the rock world, and equally sick of the world we are living in.

Labels: Can you see it coming., The Other Side