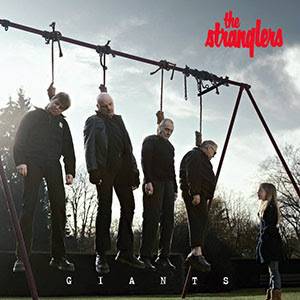 Prior to hearing 'Giants' I was surprised to see a great deal of lacklustre reviews proliferate among the mainstream music magazines and the world of online fanzines and blogs.
If I was to take these less than praiseworthy reviews at face value then it would be expected that the current album was obviously a major stumble after the excellent 'Norfolk Coast' and 'Suite XVI'.
Yet here I am with it playing in the background and gleefully marching out of step with what seems to be the common consensus.
To my ears there's not much wrong with it at all.
It opens with some string stretching, a fat bass sound kicks in and then with some picking that sounds like the intro to a sixties spy movie The Stranglers are out of the gate and hitting the ground running with an instrumental of epic proportions.
By the second track we are in familiar Stranglers territory as the bass rumbles on and the keyboards come to the fore.
All I can think is what's not to like?
This is The Stranglers doing what they do best.
The punk tag is a distant memory and they're now in the enviable position of having a sound that is identifiably their own.
I mean c'mon. Who sounds like The Stranglers?
Even when they stretch out in different musical directions they are still unmistakeably The Stranglers.
There's also been some comments bandied about that the musicianship is a bit clunky and unimaginative.
Once again I'm not getting that at all.
As each song revealed itself I just became increasingly happy with it.
It's a rock solid album with nary a hint of filler.
Everything sounds very well executed and the lyrics are still a cut above what most bands who dragged themselves out of the primordial punk pool could manage.
The addition of Baz taking over on vocal duties over the last three albums has rejuvenated the band and I don't see any evidence to support that they are treading water on this at all
How many other bands who formed in 1974 are still going strong and releasing albums of this quality while stylishly avoiding the pitfalls of rehashing the past?
What's that? You can't think of any just now.
Thought so.
This is simply the third in a run of truly excellent releases that will no doubt bring more people to the fold.
They've still got it and recent live outings support that to.
In fact a quick look at chart positions shows that Suite XVI hit higher than Norfolk Coast and similarly Giants has charted higher that Suite XVI.
This is in no way a band on a downward slide
The Stranglers are doing fine and the people who are presently measuring them up for their coffins have arrived a tad to early for the wake.
What was it Mark Twain said about them.
'Reports of their death have been greatly exaggerated'
(For the record the Mark Twain that said that should not be confused with the American novelist. This Mark Twain lives two doors down and is well known for paraphrasing others)
So what else can be said?
Well ignore the reviews. Even this one, and go out and buy Giants and make your own mind up.
Posted by It's a **** thing at 14:08