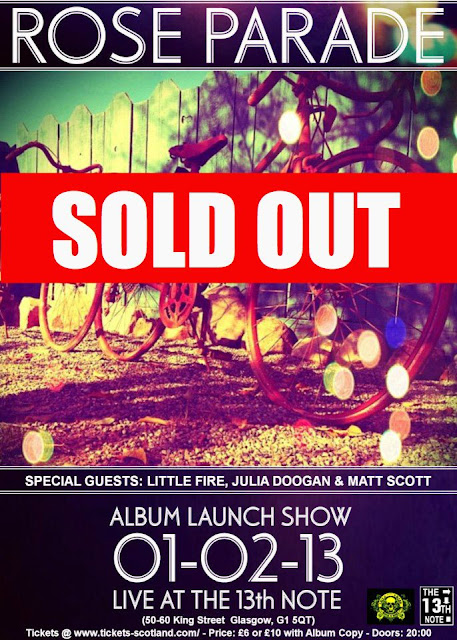 There are two words that when put together elicit equal amounts of joy and sadness.
They are sold, followed by out.
If we aren't going to go down the path of talking about artists who have allegedly sold out their credibility for stardom.
Then what we are left with is the proclamation of the two words together regarding an event being now ticket-less.

On the one side of the coin are the artists who know that people are going to make the effort to come and see them, and a busy night rather than playing to one man and his dog, is ahead of them.
For the venue the words are accompanied by the ringing of their tills.
For a promoter the sound is one of a sigh of relief, and for those with tickets there's a smug little voice reminding them that shelling out early for a ticket was a good idea.

On the other side of the coin are those who thought that they would just leave it until the night and pop in.
The ones who know that they had the chance to attend, but let it slip through their fingers.
With them sharing sad faces are unfortunately the people who simply didn't have the means at their disposal to grab a ticket and are now a tad pee'ed off that the night has arrived and they are still skint.
I feel for the later, but I'm not so fussed about the former.

And tonight is one of those nights that draws out all those feelings.

Rose Parade actually sold out weeks ago, but tonight is the night where all the work they have put into recording their debut album is revealed.
The excitement is mounting and with three excellent supports in place it's all shaping up to be a 'you had to be there' gig.

I'm fully expecting to indulge in a weekend of reading posts from people on the social networking sites that mention how utterly fantastic the gig was.

I would advice people to pop in as early as they can so that they can grab a bite from the much loved menu that the 13th Note has prior to them securing a space with a prime view.